The three foot pedals of the piano are not just there for appearance. Each of them has a purpose that aids in creating the desired sound on the piano. Unlike organ foot pedals which are essentially a giant keyboard for your feet, the piano pedals produce an effect that you won’t hear until you strike the keys. So to really understand how the pedals affect the sound, you have to know how a piano creates its sound. 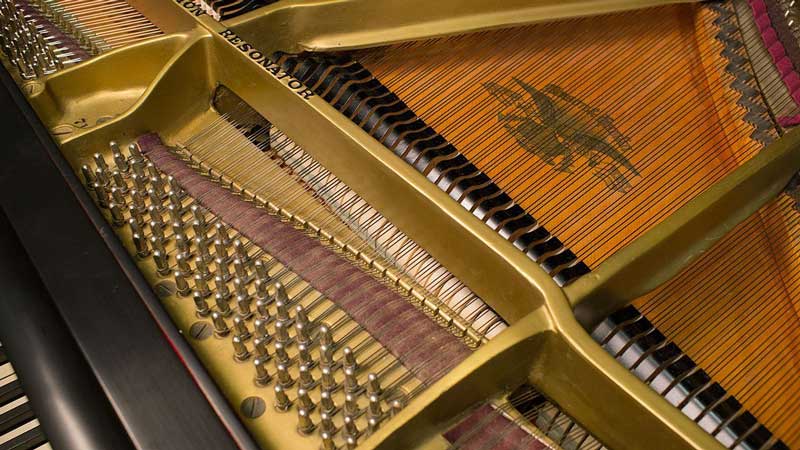 How A Piano Works

If you were to look inside a piano, you’d see a bunch of long strings, hammers, and dampers. Each piano key has its own unique set of 3 strings, a hammer, and a damper. (There’s some variation to that at the high and low ends of the piano keyboard, but generally speaking this is the case.) When you press a key, the corresponding hammer strikes the appropriate strings, which then vibrate to produce a sound. The moment you let go of the key you’ve pressed, the damper comes down to stop the strings from vibrating. That is why the sound stops, and this now brings me to the pedals. 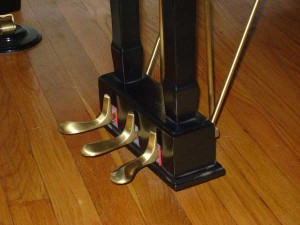 Sustain Pedal, a.k.a. Damper Pedal (the one on the right)

The rightmost pedal is often called the damper pedal because when you press your foot on it, it raises all the dampers at once. That means that when you press the keys and then let go, the dampers will not fall down to stop the sound. Thus the sound will continue echoing on in a sustained fashion (hence the name “sustain pedal”). The moment you release your foot from the pedal, the dampers will all fall down simultaneously to stop the sound. This pedal is the most commonly used one and it is how many songs played on piano have a resonant, rich sound.

Soft Pedal, a.k.a. Una Corda Pedal (the one on the left)

Putting your foot on the soft pedal makes it so that when you press a key, it sounds quieter. The pedal does this in one of two ways, depending on the kind of piano. In a grand piano, pressing the soft pedal moves the hammers a little to the right so that instead of hitting all 3 strings at once, they hit only 2. With fewer strings resonating when struck, the produced sound is quieter. However, on an upright piano, the hammers are simply brought closer to the strings to produce a quieter sound. This is a useful feature if you ever want a particular part of your song to sound very quiet…or if you’re trying to play quietly while you practice. 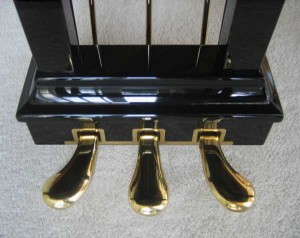 Sostenuto Pedal (the one in the middle)

The middle pedal is a source of confusion for most, and that could be because it does different things on different pianos. For most pianos, the sostenuto pedal is similar to the damper pedal, except that pressing it only raises the hammers to create a sustained ringing for those keys that you were pressing when you put your foot on the pedal. Press and hold a few keys, the press the sostenuto pedal, and then release those keys and play others. Those keys will continue to ring while the others will continue to play normally, until you release the pedal. That’s how a pianist can play sustained chords and then use their fingers to play a melody line while the sustained chords continue ringing. Some upright pianos don’t even have this pedal, on some pianos it doesn’t work, and older upright pianos treat it as a second sustain pedal but for the bass register only.

Clearly, the damper pedal on the right is the most popular and is often the only one people use. In fact, if you purchase a keyboard, you’ll get a single keyboard pedal that does what the damper pedal does. But the other two can add a lot to your music. I’ve played multiple pieces where I’ve used all 3 pedals at different times in the song. Now that you know what they can do, play around with them to see how they could improve your performance.

5 Bad Piano Habits You Should Break