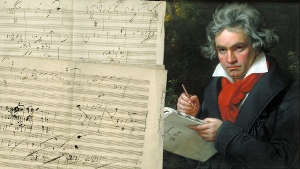 Today marks the 245th anniversary of the baptism of Ludwig van Beethoven (check out the Google doodle in celebration! It’s fantastic!). I just wanted to share a few things and thoughts about this great composer here in honor of him and the legacy he left behind.

Beethoven is one of the most well-known composers from the Classical Era, but his influence goes much deeper than that. Beethoven was a pivotal figure in transitioning music from traditional classical form into Romanticism, where personal expression gained a greater role. Beethoven’s musical expression bursts out of his music, from moments of the deepest melancholy to the most exultant rejoicing.

Beethoven had many idiosyncrasies, and he went through a lot of turmoil throughout his life. What I cannot imagine is how this incredibly gifted composer was able to deal with going deaf. By his late 20s (so young!) he was losing his hearing. I truly cannot imagine the pain he felt, being the musician he was. While he suffered depression, Beethoven wanted to continue living through his art and on behalf of his music, and he has been quoted as saying that he wanted to give the world “all the music I felt was within me.” You can hear the heroic style in his later music, culminating in the majestic and well-known Symphony No. 9 (more commonly known as Ode to Joy).

Influence on the World

Beethoven’s music is still widely played today, from Für Elise to Symphony No. 5 to the Moonlight Sonata to Ode to Joy. It’s hard to find someone who hasn’t heard these pieces. What’s more is that nearly every development in Western art music can be traced back to the Classical Era. Beethoven himself transformed Sonata form and brought new emotional and intellectual depth to his music, inspiring many others who came after him. Contemporary music would not be what it is today without the influence of gifted composers like Beethoven. It has been said that Beethoven established the popular concept of the “artist”, a person separate from society with a profound influence over the culture. An estimated 20,000 Viennese citizens attended his funeral — quite a sum, especially for the year 1827, and a clear testament to the influence he had over his contemporaries (not to mention the world today).

How can I express what I think about Beethoven? I have long loved his music and have learned to play many of his pieces. I have felt chills listening to his symphonies, sonatas, and concertos. I have studied his music and labored over his compositions to perfect them for auditions and performances. I have performed and transposed and adapted and arranged his music, and every time I touch it I marvel at all that he created. I have heard his direct influence on contemporary music. My own compositions are influenced by his style. I have deep admiration for how he handled his deafness and how he continued composing through it — even total hearing loss could not steal away the music that was within him. I feel as though I understand him in some small way, because I have so much music I also wish to share with the world. In short, Beethoven has always inspired me and continues to inspire me. May he also inspire you, your music, and your life.