Playing music is generally more relaxed. You read the music and play it through from top to bottom, or you sit down at a piano and just start playing whatever comes to you. There’s rarely an intense focus; it’s just something you’re doing. It might be fun, it might be relaxing, or it might be something you do when you’re bored. For some musicians, Playing is an attempt at Practicing, but it doesn’t accomplish what Practicing can. It is in Playing music that you get a general grasp for the music, that you can see where it’s going, that you can identify the feel of the song. In its relaxed approach, Playing music lacks the focus and energy found in Practicing or Performing. With playing, your growth begins, but your growth will be limited without Practicing or Performing.

Practicing music is focused. It requires endurance. It may be hard. You struggle through difficult passages, trying to learn the notes and articulations and dynamics and everything. You break the music down into small segments, figuring out this rhythm here and that arpeggio there. You work on technical parts, you slow it down, and you repeat sections over and over, gradually speeding up your tempo and adding in all the elements until you can play everything correctly. Practicing will sometimes include both Playing and Performing. Pausing your Practice to Play music helps a frustrating practice session become more relaxed. It also helps you regain your feel for the piece, as Practicing too much can become more mechanical and less musical. Ultimately, once you’ve put in your practice time and you’re preparing to perform, Performing your music as a part of Practicing helps you be ready for that performance. Most of the time, Practicing music is learning and mastering. With Practice, you can accomplish difficult things and grow as a musician, and you will prepare yourself to grow even more by Performing.

Performing music is the culmination of Playing and Practicing. After all your hard work, you Perform your music for others to hear. It is intense. It is completely different from Playing and Performing. It feels unlike anything else. Performances come in all kinds, from performing at home for your family to performing at a recital to performing at a competition or audition. In all cases, Performing invites outside critique while giving others a chance to revel in the music you are sharing with them. Additionally, Performing requires a level of focus even beyond that of Practice. When you are Performing music, you must be wholly and intimately connected to the piece. You must remember every detail of Practicing (don’t forget to clear the pedal here, remember to decrescendo there) while keeping with you the ease and feel associated with Playing the music. This takes a lot of energy, and indeed, your energy level while Performing should be exponentially high. Your listeners should feel as though you and the music are ONE, which you won’t achieve without Playing and Practicing. Two musicians performing the same piece will not perform it the same way, even if they were taught by the same instructor, because a Performance is a piece or extension of the Performer. Your emotion, your thoughts, your soul, and your life experiences all influence every single Performance you give. In Performing music, you make yourself vulnerable to the comments of your listeners. In the end, Performing music is how you grow most of all. 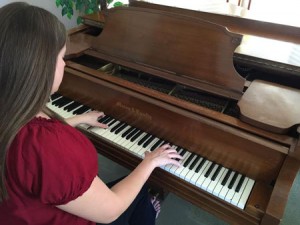 These three P’s each have their time and place. Some people will spend most of their time Playing, doing a little Practicing, and doing little or no Performing while others will spend all of their time Practicing and Performing with little or no Playing. It is important to balance them all together so that music is neither underwhelming nor overwhelming for you, but becomes a part of who you are. A skilled musician will know how and when to Play, to Practice, and to Perform. Learn to balance the three P’s of Playing, Practicing, and Performing, and your experience with music will enrich your life.

10 Tips to Improve Your Practicing