A flute is technically any open tube that you blow into to produce sound (even an empty bottle of Coke). The earliest usage of the word “flute” was found in Geoffrey…

A few months ago, I read this article about the devaluation of music (Peter Hollens shared it on his Facebook page). It proved to be an interesting read and provoked a lot of discussion between artists and consumers. Here I will share the main points author Craig Havighurst shares in this article and my own perspective on what he has to say. I’d love to hear your thoughts!

POINT 1: THE DEATH OF CONTEXT. Instead of liner notes, credits, and other context for the creation of the music, songs today are reduced to only Artist Name, Song Title, Album, and Album Art.

My thoughts: This is both good and bad. On the positive side, this has enabled music consumers to gather tons of music into one small item like an iPhone and be able to listen to anything they want to without having to carry around multiple music playing devices, multiple CDs, etc. You can have easy access to any music you want, which allows you to consume more altogether. But from my perspective as an artist, this means that unless my listeners know me personally, they will know nothing about my music except my name, the title of the song, the title of the album, and the image I’ve chosen for the song. Lyrics may convey a message, but without knowing what the songwriter was inspired by, the intended message is lost. As for instrumental music? It’s all the more meaningful when you know what inspired it, what the artist was thinking, how they felt, and what led to the creation of the music you are listening to. I create mostly instrumental music, and I want people to know these things about my music because context makes it more alive, powerful, and meaningful. POINT 2: COMMERCIAL RADIO. Radio playlists now repeat a handful of singles over and over, with very little variety. Our listening has become passive and most listeners are exposed only to overproduced hit numbers.

My thoughts: 100% agree. Today’s radio stations are no longer a place to hear new music (unless it’s a new song by a Top 10 artist). They’re not a place to hear music that has a lot of variety or interesting musicality, either. Very often radio songs have incredibly repetitive melodies and simple chord progressions (as humorously demonstrated by Axis of Awesome in the video below…warning: brief strong language around min 5:20).

POINT 3: THE MEDIA. Rather than continuing to expose the public to artists across all types of music, mainstream media is now almost exclusively pop. Media completely ignores other genres and promotes only already-known popular artists.

My thoughts: I agree for the most part. The exception is film scores, which have been known to transcend this and bring beautiful music to listeners’ ears (though listeners rarely appreciate this kind of music for what it is). Most listeners consume music from the radio or television shows only, which is almost exclusively one-note pop. Movies today no longer include musical numbers or extended dance scenes; film music is primarily used as an instrumental soundtrack. The key problem here is the type of media we consume. Gone are the days when people cared to attend plays, musicals, operas, and concerts of all varieties to enrich their lives. Now, because increasingly fewer people care about these things, the opera singers, theatre actors, orchestra pit members, composers, orchestrators, etc. are paid less and less for their life work of sharing such beauty and talent with the world. If anyone has a solution for this, please share it.

My thoughts: This does not mean that music cannot be enjoyed along with other things, and in fact, this dual experience can enhance your appreciation of both the music and its accompanying feature. However, fewer and fewer listeners are even able to enjoy music on its own. Many will “get bored” and walk away. Why did music lose value as something unto itself? Music has the power to capture emotion, imagery, and all kinds of things without needing anything else. When was the last time you stopped what you were doing to listen to a piece of music and let it fill you? Even Looney Tunes (which is still awesome) and Little Einstein, while well-intentioned, miss this point. Just stop what you’re doing, close your eyes, and listen…your soul will be lifted, your mind will be expanded, and you will be enriched. POINT 5: ANTI-INTELLECTUALISM. Music is valued as something with only emotional value, not intellectual value. Music is used as a tool to trigger an emotional response rather than to enrich the mind and enlighten the individual.

My thoughts: I feel that music has incredible value as an emotional tool. Music without emotion is not music at all. However, we have gone too far the other direction and have now begun to create and consume music that has little else to offer besides emotional appeal. The notion that “we only need to feel the music” robs us of the ability to appreciate music and its importance to society. Music can convey messages, understanding, intelligence, communication, creativity, and more. Not every piece of music has to be deep, layered, thought-provoking, or intellectual. Some people want to enjoy their catchy tunes and need nothing else. But if that is all that music has become, the world is worse off for it.

POINT 6: MOVIES & GAMES. Film and gaming music has led to the development of cliché musical themes where “heroism” has one sound, “romance” has another, and “grief” has another.

My thoughts: While there are repetitive motifs that are abused in music today, this idea actually devalues all that contemporary film and game composers contribute — which is so much more than the majority of mainstream pop music. I grew up surrounded by classical music and was heavily involved in studying classical piano and voice, and there is so much music in film scores and video games that I find incredibly complex, exciting, and amazing. I have found many video game scores in particular to be moving, interesting, exciting, intellectual, and uniquely complex. 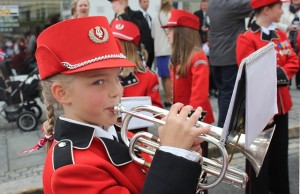 POINT 7: MUSIC IN SCHOOLS. Music is continually cut from school curricula. Attempts at curtailing this are about how music makes kids smarter, and while this is true, it also misses the mark that music makes kids more musical. Music education fosters a better musical ear and a greater interest in music.

My thoughts: I’m a music teacher AND creator, and of course I want music in the schools. Tons of academic research has proven the academic benefits of music, which is why it’s the ammunition we music advocates use. But there are other benefits, too. For my Master’s Thesis in Sociology I wanted to study this very concept, but there wasn’t sufficient national data. I ended up proving that music and other extracurricular activities increase academic self-efficacy (not only your grades but how you feel about school, your academic ambitions, how confident you are about your education, how hard you’ll work on your schoolwork, etc.). But this is still related to academia, and there is so much more that music can do for you! In studying music you learn performance skills, discipline, focus, emotional skills, creativity, problem solving skills…but above all, you become more musical. Studying persuasive writing makes you better at persuasive writing, and you learn how to recognize a good or bad argument when you see it. In the same way, studying music makes you better at music, and you learn how to recognize good or bad music when you hear it. END_OF_DOCUMENT_TOKEN_TO_BE_REPLACED

2015 was a great year for me and my music! My Corona music studio is thriving; this year has brought me new students in piano, voice, flute, AND music theory. I released an EP…

Today marks the 245th anniversary of the baptism of Ludwig van Beethoven (check out the Google doodle in celebration! It's fantastic!). I just wanted to share a few things and…

When I was looking for ideas on what to blog about next, my husband suggested I write about Christmas music. I did a quick Google search for some ideas on what…

Last night was my Christmas Piano Recital for my students. I am so proud of how all my students performed! Everyone was well prepared because they'd practiced hard, and they all…

My newest album is now live! You can find "A Classic Piano Christmas Volume 1" here in my Shop.A little background for this album: I love holiday and Christmas music…

I love music. I don't know that I can say much more than that, and truthfully, words can't do it justice. My love for it grows daily as I learn to…